Man Vows To Break World Record With a 2km-Long Pizza

A man has vowed to break the record for the world’s longest pizza with a 2km beast, cooked in a 32-foot pizza oven. 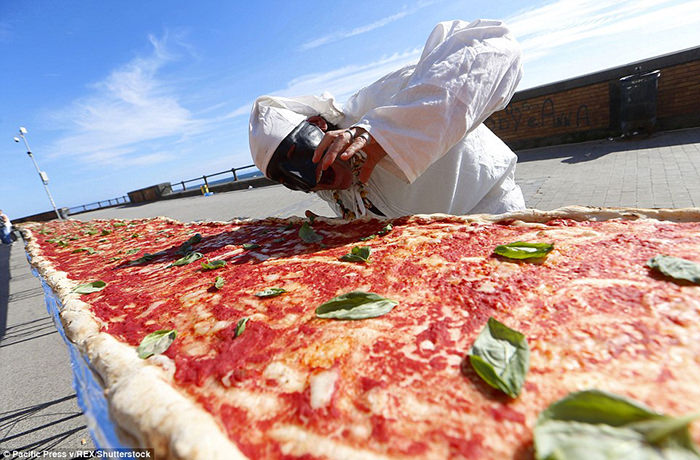 A man has vowed to break the record for the world’s longest pizza with a 2km beast, cooked in a 32-foot pizza oven.

Fash Asvadi is a LA-based pizza oven importer and seller (who else would have access to a 32 foot-long oven?) who is determined to become the first American to break the record for the world’s longest pizza.

The record is currently sitting at 1,853.88m and was achieved by Napoli Pizza Village in Naples, Italy, in May last year.

“As far as I know, this is the first attempt ever for this record in the US,” Asvadi told Munchies. “Making 1.3 miles of pizza is not something that just anybody can pull off.”

He plans to cook the pizza in a makeshift oven he has built himself:

“We’ve built a special 32-foot long trailer that has several ovens attached to it—it looks like a locomotive—and it’s going to go over the 1.3 miles of scaffolding that the pizza will be on top of. The assembly team will arrive around 2am along with truckloads of the dough, sauce, and cheese.

We have a dough team that will start assembling the crust and while that happens, the ovens will begin to move like a train over the dough and cook the base from one side to the other.”

Asvadi also told Munchies that prep has been going on for over six months.

“We want to extend the record by 1,000 feet. Really, the most difficult part about all this has been finding a suitable site, because you obviously can’t have the pizza taking sharp bends. Finally, we found a racetrack that has a two-mile track without sharp bends, so we can pull off what we need to there.”

The dough for the pizza weighs whopping 8000 pounds, with over 9000 pounds of sauce and cheese topping it off.

The project’s website says that, “Attempting records is an inherent part of anyone’s spiritual journey; something that unites. Something that brings out the very best in everyone. A reason to celebrate humanity and friendship.”

We reckon the same can be said for making pizza in just about any scenario.

While we might not be this crazy at Manoosh, we are intent on serving the best pizza in Sydney. Simply order from us online or drop by and see us in person – we guarantee you will not be disappointed.